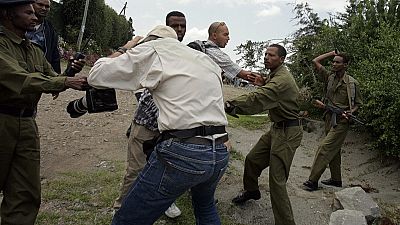 Ethiopia has been cited as one of the worst jailers of journalists in sub-Saharan Africa, according to the Committee to Protect Journalists (CPJ).

According to the committee, the conflict that broke out in November 2020 in northern Ethiopia has accelerated the deterioration of press freedom and wiped out the progress seen when Abiy Ahmed came to power in 2018.

As of 1 December - the date of the organisation's annual census - 16 Ethiopian journalists were imprisoned, putting Ethiopia on a par with ultra-repressive neighbouring Eritrea, the CPJ said in a statement received by AFP on Tuesday, August 02, even though only eight reporters are still in prison.

"The conflict between the federal government and rebel forces of the Tigray People's Liberation Front (TPLF) has unleashed a media crackdown that has extinguished the glimmer of hope ignited by Prime Minister Abiy Ahmed's early reforms" in what was "one of the most censored countries in the world" when the TPLF ruled Ethiopia between 1991 and 2018, CPJ said.

"The struggle for control of the war narrative is one of the main reasons for the growing hostility towards the press" in Ethiopia, where "journalists and commentators expressing a dissenting voice or producing independent journalism are likely to be arrested, threatened, deported or suffer other forms of attack."

According to the organisation, 63 journalists have been arrested since the start of the government offensive against the rebel authorities in Tigray on 4 November 2020, eight of whom were still being held as of 1 August, and several have been assaulted or intimidated, and two have been murdered.

In a related development, the CPJ called for the release of Temesgen Desalegn, editor of the Amharic-language magazine Fitih, who has been in detention since 26 May, and for a wave of arrests in the Amhara region, where discontent against the government is growing.

At the end of July, according to CPJ, the Supreme Court overturned a court order releasing Mr Temesgen on bail on charges of divulging military secrets and publishing inaccurate, hateful or subversive information aimed at demoralising the population, both of which carry a five-and ten-year prison sentence respectively.