South Africa's rising gun violence crimes has been attributed to the smuggling of high caliber guns like AK-47s.

The Global Initiative Against Transnational Organized Crime reports that there are about 3.8 million unregistered illegal firearms in circulation in South Africa, Mozambique, and Zimbabwe.

Illicit guns and ammunition are a currency in the underworld of gangs, mass shootings and wildlife crime. Gareth Newham, Institute for Security Studies Head of Justice and Violence Prevention Programme said it is difficult in South Africa to hire out high caliber guns like AK-47s. If found to be in possession of an automated weapon, a 15 year prison sentence could be imposed by the courts.

"It is not easy to get an automatic like AK-47s. Some of these weapons have been in the country for a long time since the 1980's and others get smuggled from across our borders or stolen from arms military safehouses in South Africa. "

On Sunday, unknown shooters opened fire at a tavern in Soweto killing 16 people. South Africa's Minister of Police, Bheki Cele said the police are working towards clamping down on illegally acquired firearms.

"I heard that, and I’m hearing again that people are playing with guns, there’s too many guns here. There’s people who arrive carrying AK47 guns, killing so many people, it simply means there’s too many illegal firearms, therefore we are going to have to clampdown, lockdown the area for about twenty four hours at some point, do a door to door, mattress to mattress searching for these weapons." said Cele 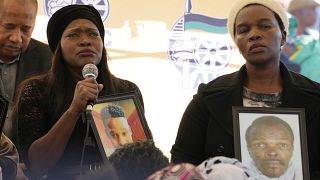