In Burkina Faso, a group of lawyers representing the civil parties in the case of former assassinated leader Thomas Sankara on Friday demanded the execution of an arrest warrant against the return ex-leader Blaise Compaore.

The Collective is indignant at what it describes as a "defiance of justice" and calls on the judicial and political authorities to assume their responsibilities.

"The coup plotters, the pseudo reconcilers, are simply trying to kill the rule of law and democracy in Burkina. Take the other convicts, my friend Diendéré, he is serving his sentence! It must be said with dignity. But why is he a Burkinabè, and condemned, he is serving his sentence. What's different for Blaise Compaoré? He too is condemned, for him, they roll out the red carpet?" asked Prosper Farama, a member of the collective of Thomas Sankara's lawyers.

"The process is not to provide impunity but to contribute to the search for a solution for a Burkina Faso of peace and cohesion," said  Paul-Henri Sandaogo Damiba, the President of Burkina Faso.

It’s unclear how long Compaore will stay in the country. 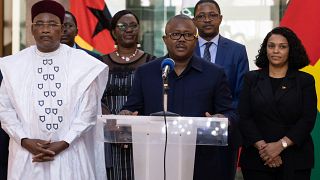