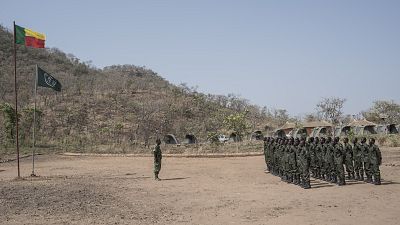 Benin's government has been taking steps to stop incursions after several months of terrorist attacks in the northwest and northeast of the country.

Despite this citizens still feel insecure. Jihadists first struck Porga in the Pendjari National Park area in December 2021, where two soldiers and an assailant lost their lives.

Following this, the government set up a military base in the north of the country aimed at reinforcing the security of goods and people.

But the attacks continued with the storming of the Monsey and Dassari police stations and other localities in the north, causing loss of life both among armed forces and civilians.

The authorities continue to reassure the people of Benin: "The Beninese army is sufficiently equipped to ward off all the scourges that can disturb the tranquillity of the Beninese," Alain Fortunet Nouatin, Beninese Minister of Defense said.

"I will tell the people of Benin that they have nothing to fear."

"We are going to make it so that every time someone tries to tackle Benin that they feel it deep in their spinal cord," Gbaguidi said.

But the president of a consumer association in Benin, Robin Accrombessi believes the move to counter the jihadist attacks has left the average Beninese with the impression that his freedom of movement has been restricted.

"It prevents the consumer from having psychological security first because we are in constant fear."

"You have to go to regions and you dare not. You need to go sightseeing, to go to certain parks, to certain tourist sites, you don't dare. It means that we are no longer free," Accrombessi said.

Benin has long been one of the more stable countries in West Africa, where Islamic State and al Qaeda militants threaten Sahel countries, although criminal smuggling gangs also operate along its frontier.