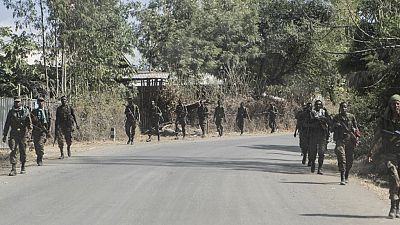 It was not immediately possible to verify this information and obtain details, as the telecommunications network was cut in the area concerned, located in the far west of Ethiopia and bordering South Sudan.

"Citizens living in the Qellem Wollega administrative area of Oromia regional state were massacred," Mr Abiy tweeted on his official account, without specifying the date of the incident or its exact location.

He accused the OLA, which has been fighting the federal government in Oromia since 2018 and is classified as a "terrorist organisation" by the Ethiopian authorities, of carrying out the killing "in the course of its escape" after being "crushed by the security forces".

"We will pursue this terrorist group to the end and eradicate it," he promised.

The US-based Amhara Association of America (AAA) said in a message to AFP that the killing began at around 6am on Monday at Mender (village, in Amharic) 20, located in the Hawa Gelan woreda (district) and targeted Amhara, the country's second-largest ethnolinguistic community, which is a minority in Oromia.

"One of our investigators was able to speak to three witnesses who were hiding in a nearby forest," the AAA said.

The Amhara Media Corporation, the Amhara region's government media outlet, broadcast an anonymous testimony from a survivor of the massacre, also locating it in village 20.

"No one came to our aid" during the killing, which began at around 5 am and lasted several hours, he said.

The attackers left and "now the bodies are being collected, so far about 300 have been taken, but this is only the beginning, there are still many people left unaccounted for," he added.

The Ethiopian Human Rights Commission (EHRC), a state-run but statutorily independent institution, on Monday night denounced the "continuing insecurity in the area and what amounts to an ethnically targeted killing".

The head of the EHRC, Daniel Bekele, called in a statement for an "urgent reinforcement of government forces to prevent further civilian deaths".

According to the EHRC, government security forces appear to have reached the area, but residents continue to seek refuge elsewhere.

On 18 June, gunmen massacred hundreds of mostly Amhara civilians in the hamlet of Tole, located in the West Wollega area of Oromia's Qellem Wollega.

No official death toll has been released, but Billene Seyoum, a spokeswoman for the Prime Minister, told the press on 30 June that 338 victims had already been identified.

Authorities and survivors attributed the massacre to the OLA, which denied it, blaming it on a pro-government militia. The UN High Commissioner for Human Rights, Michelle Bachelet, has called for an "impartial and thorough" investigation by the Ethiopian authorities.

On Monday morning, Human Rights Watch (HRW) denounced a "persistent cycle of violence" by both security forces and rebels against civilians in Oromia, who are "trapped" in a "violent government counter-insurgency campaign" against the OLA.

The conflict in northern Ethiopia, which has pitted the government against rebels in the Tigray region since November 2020, overshadows this violence in Oromia, where "widespread impunity reigns", according to the organisation.