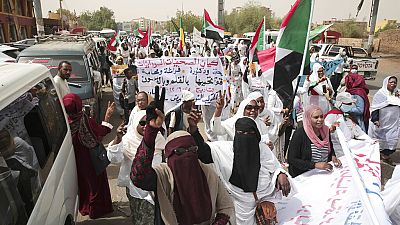 Sudan’s Doctors Committee said in a tweet that four people were fatally shot when police fired live ammunition at protesters in Omdurman, the twin city of Khartoum, the Sudanese capital.

Across the Nile River in Khartoum, a fifth person died after being shot in the head, said the group, which tracks casualties during protests. The identity of all five could not be immediately known.

Also in Khartoum, police fired tear gas at thousands of demonstrators trying to reach the Republican Palace, the military's seat of power in the heart of the city. Videos showing thousands waving Sudanese flags and running under clouds of tear gas were posted on social media.

Other videos show demonstrators raising banners reading “No Negotiations! No Partnership” — reiterating their opposition to any power-sharing deal with the military rulers.

Sudan’s leading pro-democracy groups — Forces for the Declaration of Freedom and Change and the Resistance Committees — had called for a nationwide protest on Thursday to reiterate their demands for a reversal of the Oct. 25 military coup.

Thursday's protests also fell on the third anniversary of a 2019 mass rally that forced the generals to sit down at the negotiating table with pro-democracy groups and eventually sign a power-sharing agreement that was expected to govern Sudan during a transitional period, until general elections were to be held.

However, the coup last October scuttled this arrangement.

Meanwhile, the London-based internet advocacy group, NetBlocks, said internet access was disrupted across many mobile and fixed-line internet providers in Sudan on Thursday, including state operator Sudantel, leaving national connectivity at only 17% of its ordinary level.

“The restrictions impact many internet users in Sudan and are likely to significantly limit coverage of events on the ground,” the statement said.

The October coup has triggered near-daily street protests, which authorities have met with a deadly crackdown that has so far killed 107 people, including Thursday's casualties. Among those killed were 17 children, according to the Doctors Committee.