Gunmen using explosives killed at least 40 people, including many children, in an attack on St. Francis Catholic Church. The attack carried out moments before the church service was to end, has drawn local and international condemnation. It also leaves fear on the relatively spared southwest region where attacks of this scale has not been recorded until now.

In Lagos, Nigeria’s commercial hub, residents say the attack is a wake-up call to the government that nowhere is longer safe in the country.

Her concerns were echoed by another Lagos resident. "Sincerely speaking the government is not doing enough to protect its citizens, remember the Kaduna train attack, the captives are still there" Sam Ugwumba said."The bandits are still releasing videos showing where they are, we don’t know what the government is doing to make sure they take responsibility for what is happening in Nigeria. Nowhere is safe", Ugwumba a publisher in the city added.

"We have a president, a governor, a police and army chiefs yet we are afraid. Am I expecting anything to come from the Owo killings? No. Even the government was not interested, they are busy in their jamboree otherwise known as party convention", a visibly sad and disappointed Uwazurike lamented.

"They had their dinner; some governors and presidential aspirants are rushing there it is a pleasant pilgrimage but that is all. Nothing will come out of it because the Nigeria government is playing to the gallery. The security and welfare of the people is the primary function of the government", he added.

"I am here in Lagos, 370 kilometres from the scene where the deadly attack in Owo Ondo state southwest Nigeria occurred. Many here are dazed, they are afraid and the question on their lips is when will this end?" the concluding and frank words with a lingering question from David Agunloye Taylor. 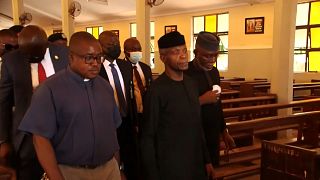