The first African Elephant Summit came to a close Thursday, in Hwange, northern Zimbabwe. Harare, some of its neighbours in southern Africa, Japan and China -two large consumer markets of elephant tusk- gathered in a bid to develop a new management strategy and promote the lifting of a ban on ivory trade.

The Elephant Summit in Zimbabwe came to a close Thursday. Citing a need to derive economic value from thriving elephant herds and management issues, Harare, together with representatives of 14 African countries and two large consumer markets of Ivory gathered in a bid to develop a new strategy and for some, restart trade despite the 1989 CITES ban on Ivory trade.

Zimbabwean officials say the country can support up to 55,000 elephants but the population has more than doubled to 100,000.

Moreover, humans-animals conflicts are on the rise. Elephants have so far this year killed 60 people, compared with 72 in all of last year.

Kenneth Uiseb, Deputy Director for Wildlife Research and Monitoring - Namibia would like for the population to be involved in the decision-making process: "These communities share their living space with wildlife, sometimes with dangerous wildlife such as lions, elephants, and that sometimes they contribute actively to the conservation of these animals so if there are decisions to be made about the future of these elephants, about the trade then it's just important that community voice is heard and that communities actively participate in this process."

CITES is an international agreement between states. Its aim at ensuring that international trade in wild animals and plants specimens does not threaten the survival of the species. Two one-off sales of ivory were allowed since the 1989 under ban under the CITES.

Dr Kabelo Senyatso, the director department of Wildlife and National Parks Botswana believes it is the Convention on International Trade in Endangered Species of Wild Fauna and Flora (CITES) that needs a revamp:  "When you look at how CITES is at the moment, the very people that bear the biggest brunt of living with the wildlife are not at the table. It's, it's amazing that even governments are struggling to be at the table because unfortunately it's particularly western NGOs that are dictating where CITES should, should head so it's a real issue."

In 2019, Botswana, Namibia and Zimbabwe asked for the right to sell ivory acquired through natural deaths, confiscations and culling. But that demand was rejected by a CITES meeting in Geneva.

In addition to the impact of the ban on ivory trade on states' finances and the cohabitation between wildlife animals and villagers, the management of elephant herds was the other pressing issue of the African Elephant summit.

Southern African countries are home to approximately 293,000, or 70% of Africa’s elephant population and  Zimbabwe gathers the world's largest elephant population. Dr Sam Perreira, scientific officer for the Rhino Specialist Group - South Africa :"About 70% of our elephants share boundaries with other countries, Mozambique, Zimbabwe, Botswana. So yes our elephants don't have passports, and they don't do Covid tests. They walk forward and backwards so, so that means we, we cannot manage elephants in isolation from, from the rest of Africa."

Certain countries with large elephant herds like Zimbabwe or Botswana insist they are ill-equipped to protect them and deal with poachers without the money from ivory sales. Other African countries, such as Kenya, insist that all ivory sales should be banned to discourage any international trade in ivory.

Last week, Zimbabwe asked European countries for support in selling its $600 million stockpiles. But the plea did not immediately garner support.

50 anti-ivory trade NGOs warned an opening of the ivory market would decimate herds which near extinction in certain regions in addition to "sending a dangerous signal to poachers and criminal syndicates." 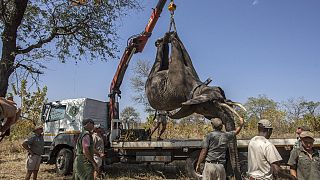 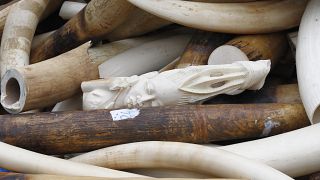