Energy companies may return to Mozambique following the improvement of security conditions in Cabo Delgado.

The poverty-stricken northern province had been suffering increasingly violent attacks by Islamic State-affiliated insurgents since 2017, many targeting towns and communities near the $20bn gas export terminal, which is backed by major international investors and companies.

The fossil fuel project has been blamed for stoking the insurgency in the north of the country, which has left thousands of people dead and displaced hundreds of thousands.

Despite the military advances, the head of the Southern African Development Community (SADC) mission in Mozambique, (SAMIM)  Mpho Molomo, said it was too early to declare the end of terrorism in Cabo Delgado.

According to Molomo, attacks and atrocities against women and children are continuing in the forests where they are hiding.

In addition to the SADC, the government in Maputo has the support of a military contingent from Rwanda.

For José de Oliveira, a researcher for energy affairs at the Catholic University of Angola, the conditions are beginning to be met for the return of multinational companies to Cabo Delgado.

"The pressures on Mozambique and the support that can be given to Mozambique to solve the situation of military and social insecurity, I think will bear fruit, because Moçambique is a country right now with the biggest reserves to be developed, there are not many gas reserves but so the biggest concentrated ones are in Mozambique."

With the energy crisis caused by Russia's war in Ukraine, Europe is looking to Africa for alternative sources of liquefied natural gas.

"Given that natural gas is going to be a transition fuel and will last many more years than oil, and given the importance that LNG is now assuming in the world, I am convinced that the projects in Mozambique will be successful," says de Oliveira.

Lawyer Alexandre Chivale does not have the same optimism regarding the gas exploration zones in Mozambique, despite a new law approved by the parliament.

"There is a risk that through these attempts to fight terrorism and money laundering could hurt rights and guarantees and freedoms of the citizen," he says.

On May 19, the Mozambican parliament approved the law to reprehend, combat and prevent terrorism.

But public opinion is divided over its possible limitations on press freedom and freedom of expression. 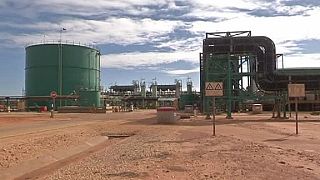