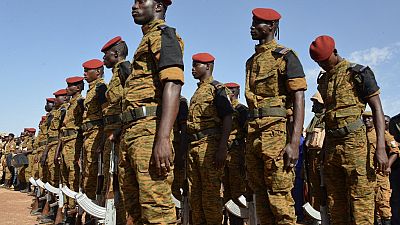 Seven soldiers and four auxiliaries of the Burkina Faso army were killed on Thursday in two ambushes by "terrorists" in the northern and central-northern regions, the army said in a statement received by AFP on Friday.

A first ambush which claimed the life of "two soldiers and four VDP", Volunteers for the Defence of the Fatherland (army auxiliaries), took place near the town of Sollé, the statement read.

In the second attack "elements of the Special Intervention Unit of the National Gendarmerie (USIGN) in Ouanobé", five gendarmes were killed, the statement added.

These ambushes by "terrorists", a term used by the army to designate the jihadists who are particularly active in northern Burkina, also left nine wounded, who were "evacuated and taken care of", according to the staff.

The army said that "on the enemy side, some twenty terrorist bodies were counted during the security operations" and added that "weapons, ammunition, vehicles and communications equipment were also destroyed or recovered".

Burkina Faso, particularly the north and east, has been the target of jihadist attacks since 2015, perpetrated by armed groups, some of which are affiliated with al-Qaeda and the Islamic State, which have left more than 2,000 people dead and 1.8 million displaced.

The country's new strongman, Lieutenant-Colonel Paul-Henri Sandaogo Damiba, who overthrew the elected president Roch Marc Christian Kaboré on 24 January, was accused of being ineffective in the face of jihadist violence, and has made the security issue his "priority".

On 24 April, fifteen people, including nine Burkinabe soldiers, were killed and around thirty wounded in simultaneous jihadist attacks against two military detachments in the north of the country, according to the army.

At the beginning of April, the Head of State announced the creation of local dialogue committees with local jihadist groups to try to curb the violence.