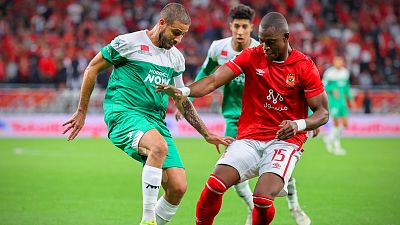 In the ongoing African Champions league, both Al Ahly of Egypt and Es Setif of Algeria made it to the semi-finals after securing important wins of Friday.

Es Setif of Algeria won against Es Tunis of Tunisia 0-1 in the CAF Champions League quarter-final.

More than 42,000 fans flocked to the stadium to watch the highly anticipated match and many more held their breaths behind screens, waiting to see how the match played out.

Wydad Casablanca of Morocco will also meet CR Belouizdad of Algeria on Sunday night, to sum up the quarter-finals.

After taking an early lead in their penultimate Group D match through Karim Boudiaf, Hernan Crespo's side conceded three goals in 16 minutes as they went into the break 3-1 down.

After Al Duhail skipper Almoez Ali had set up Michael Olunga for a tap in on the hour, their prospects still looked bleak and they trailed 3-2 going into the final 10 minutes.

The match finished 4-3, Al Duhail improved to 12 points from 5 games and with Al Taawoun and Sepahan of Iran on seven points, they cannot now be caught.

Al Duhail play Sepahan in their last group game on 26th April, with Al Taawoun up against bottom club Pakhtakor of Uzbekistan on the same day.