Heavy rains and flooding have killed at least 341 people in South Africa's eastern KwaZulu-Natal province, including the city of Durban, and more rainstorms are forecast in the coming days.

The death toll is expected to rise as scores of people, including whole families, are missing.

The persistent rains have wreaked havoc in the province, destroying homes, collapsing buildings and washing away major roads

The South African National Defense Force has deployed troops to assist with rescue and mop-up operations.

The floods have knocked out water and electricity to large parts of Durban and the surrounding eThekwini metropolitan area and it will take at least a week to restore those services, according to officials.

WATCH: Africanews' Lauriane Noelle Vofo Kana explain more about the effects these rainstorms have been having on the country. 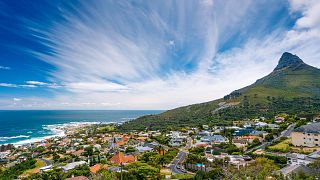 South Africa is introducing a digital nomad visa - will it revive the struggling tourism sector?

South Africa is introducing a digital nomad visa - will it revive the struggling tourism sector?