Today is world water day under the theme theme “Groundwater: Making the Invisible Visible,” and in Kenya climate change is pushing conventional water sources to the brink of exhaustion.

A new UN report highlights how the development of groundwater access can help alleviate water scarcity in drought prone regions.

In the remote village of Mwangulu in Kwale County, people have to walk three kilometers in search of water along dry riverbeds, but projects like this one could change their lives.

This drilling rig is operated by a private company, which is creating a borehole. The engineers here are expecting to access groundwater found three thousand meters below the surface.

This particular project is government funded and the work has been subcontracted to Hallmark Pump Services which says it's also operating in Southern Sudan.

The pump will be solar powered and local villagers will be given free access to the water.

According to a new report by the United Nations World Water Development, published by UNESCO, the vast potential of underground water and the need to manage it sustainably, can no longer be ignored.

The title of the new report asks the question "Is the solution to water crises hiding right under our feet?"

It says the quality of groundwater here is generally good.

This means it is safe and affordable without requiring expensive and sophisticated water treatment plants.

The report says regions, such as "Sub-Saharan Africa and the Middle East for example, hold substantial quantities of non-renewable groundwater supplies that can be extracted in order to maintain water security."

According to the UN report vast aquifers remain largely underexploited with just three percent of farmland in the regions equipped for irrigation and only 5 percent of that area uses groundwater.

It concludes the low use of renewable groundwater is due to a lack of investment in infrastructure and a lack of professional knowledge of the resource.

That's the view of Moses Tsuma a private geologist who has been carrying out water surveys and exploration in this area.

Tsuma says he's also noticed the unreliability of the rainfall due to climate change.

He says: "Because of climate change, so rains are not coming the months that they are expected to come. Now for that matter you see that even the investment that the county government has been doing to put on surface dams, water pans is no longer useful because these dams are drying. Where is the water? There is no water. So right now the most reliable source of water is ground water. And like you see, drilling is an exercise that takes only a day. A day and you have water apart from, you know, spending about a month constructing a water dam and then it becomes dry."

"We have water for only a short time. But when a dry spell sets in, there is no water anymore in those dams. Thereafter, we come to these rivers. Here we spend a lot of time coming to fetch water and going back home and it's a journey of almost two hours one way from the river to deliver water home. Then we cook for the children, and by 3PM, we are back again to the river," explains Halima Mwero, a Kwale County resident.

These women walk miles to get enough water to quench the thirst of their families, water their farm animals and to do simple things such as their laundry.

The UN report argues with the development of groundwater more land can be irrigated, this in turn could improve agricultural yields and crop diversity, all of which could drive forward economic growth.

"That is a very big irony that somebody would need to walk 3000 meters and yet there is water just 30 meters below their feet and so, this is something that if possibly we could be having a good mechanism and frameworks put in place, we could be having a solved problem of water in our rural areas especially in places where rainfall is a problem," he says.

Mwero is one of the people who spend hours each day digging along dried riverbanks for water.

She says: "This water is dirty. People do laundry, they urinate, and the cattle drink, urinate and defecate in it. We only excavate the sand a bit to get the distilled one, not that it's good, but we have no option. But now we are happy there is a borehole which has been drilled, which will bring happiness for us because this water is as clean as tap water."

Hamisi Wachondo, another local resident explains access to clean water has always been a problem.

"All my life has been spent along these riverbeds. I come with a metal bar for digging, I dig, and that has been a lifelong problem, since I was born. The only problem is water."

All the villagers are hoping the new borehole will give them better access to water.

Tsuma says the constant search for water means that they are trapped in a cycle of poverty.

"It means that, if somebody is spending half of his day on looking for water, then what else can they do? They cannot develop, they cannot go to school, even children will go to school late, they will not, you know, people will remain in poverty and there is not going to be any development because of one problem of water."

The UN report will emphasize the importance of developing groundwater sources to ease the issue of water scarcity in drought prone regions as an effort to reach its dedicated goal on water and sanitation (SDG 6) that sets out to “ensure availability and sustainable management of water and sanitation for all.” 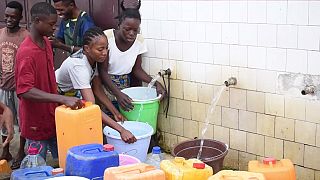 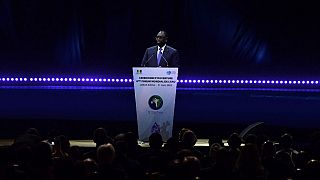