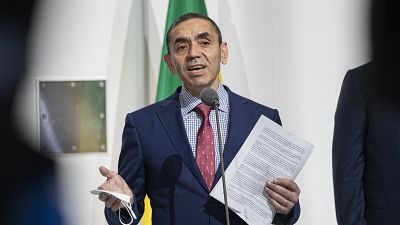 Germany's BioNTech, which together with Pfizer developed the first mRNA vaccine against the coronavirus, unveiled mobile vaccine production units housed in shipping containers on Wednesday, aimed at bringing manufacturing to Africa.

"The question was, can we make the process compact enough to fit in a container?" the CEO and co-founder of BioNTech, Ugur Sahin, told AFP.

The vaccine-maker aims to start establishing the "first manufacturing facility in the African Union" in "mid-2022", the group said in a statement.

The company said it expected to ship the so-called "BioNTainers" to Rwanda, Senegal, or both countries.

Africa is the least-vaccinated continent on Earth. Over a year after the first coronavirus vaccines were administered and two years since the start of the pandemic, just under 12 percent of Africans have been fully vaccinated.

Sahin said BioNTech, which has sold tens of millions of vaccines developed together with US pharmaceutical giant Pfizer, was aiming to "install production sites for our mRNA technology on every continent".

South Africa could "potentially" join the list of recipients of the mobile labs, BioNTech said.

The 12 containers that make up the lab are split into two modules -- one for the production of mRNA and the other for the vaccine serum -- before local partners take over the filling of the vials.

Making the vaccine involves some 50,000 steps that have to be followed meticulously. But the containers overcome this challenge by having "the process pre-validated" before they are installed, Sahin explained.

Opening a new factory to today's high standards typically takes three years. It will be 12 months before the first doses produced by the container labs are available, Sahin said.

The containers could also be used to produce vaccines against malaria based on mRNA technology, were it to be authorised after clinical trials planned to begin this year.

BioNTech employees will man the containers to begin with, while training local employees "to hand over the site in the mid- or long-term", according to the statement.

The vaccine technology will be shared without the patents behind it being waived, as requested by a number of countries and NGOs.

"Patents aren't the key. When we install the technology and hand it over to a partner, they will also get the licence to operate it," Sahin said, adding that BioNTech would assure the "responsible use".