EU chief unveiled a record investment pledge for Africa, on Thurday. Just a week away from the sixth the European Union- African Union summit.

"Today I am proud to announce more than one hundred seventy one billion dollars through the Africa-Europe programme, she said**. This is the very first regional plan under Global Gateway, two months after the launch of the scheme. It will be led by the European team and implemented in partnership with you.**" However Ursula Von der Leyen did not offer details about how the money would be raised or spent.

The chairperson of the African Union, Macky Sall welcomed the annoucement: "Europe and Africa should work together, firstly because of our geographical proximity, the peace and stability of our two continents are closely linked. Secondly, with its human and natural resources and its development needs, Africa offers Europe opportunities for investment and partnerships for shared growth and prosperity."

The EU chief arrived in Senegal on Wednesday to prepare for the EU AU summit scheduled on February 17-18. "At the summit, investments will be at the heart of the discussions because they are the means of our shared ambition," von der Leyen said. 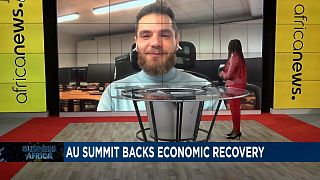