Ethiopian Prime Minister Abiy Ahmed is in the United Arab Emirates on a state visit. He arrived on Saturday and was greeted by Abu Dhabi's crown prince, Sheikh Mohammed bin Zayed Al Nahyan.

This visit comes as a war has been ravaging Ethiopia’s north since November 2020. In the conflict, thousands have been killed and some 350,000 Tigrayans left on the brink of starvation.

In the fight against Tigray rebels Abi’s government could count on foreign partners. Ethiopian authorities have resorted to drones to back their military offensive and experts say they were purchased from the United Arab Emirates, China and Turkey.

After a turning point in the war last December, there was hope that fresh mediation efforts by the United States and the African Union would enable the opening of a humanitarian access.

The Prime minister and the Prince attended an honour guard ceremony and held meetings. 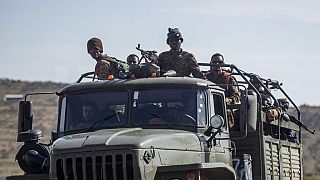