For the very first time, the Belgiann Centre for fine arts located in Brussels will hold an exhibition on the movie titled Kinshasa Now. On January 24, the museum will organize a talk that will see movie director Marc-Henri Wajnberg and Congolese artists like Freddy Tsimba who are commited to the care of street kids in Kinshasa discuss on the issue.

Thanks to the virtual reality, a visitor of the Kinshasa Now exhibition in Brussels will teleport hundreds of kilometers away to the capital of the Democratic Republic of Congo. A city famous for its vibrant energy, busy streets and the thousands children living on the streets.

The feature piece of the Belgian film director Marc-Henri Wajnberg offers a tour across one of Africa’s largest city shedding light on the resilience and self-saving potential of street kids.

"The movie starts and choices are offered to the visitor, han select with his eyes whether the child will go to church or not, if he does, the movie story will unfold that way, Marc-Henri Wajnberg explains. There are 40 possible scenarios in this story and from one encounter to another, the film is going to lead the hero Mika either to a very bad fate, or towards a rehabilitation center or even back to school. The child can also stay on the streets."

Kinshasa Now, premiered two years ago at the Venice Festival in the Venice VR Expanded category. After that, it was screened in many different locations casting the light on the lives of many street kids in the Congolese megalopolis. 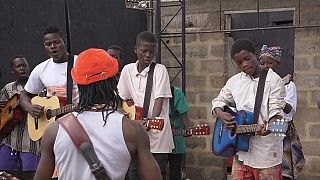