The Festival of Heritage Cities is in full swing in Ouadane, in northern Mauritania. The festival represents a developmental and cultural approach that aims to highlight the cultural and civilizational radiation of these cities, in addition to the developmental aspects that are the most important motives for organizing the festival, according to the organizers.

Mauritanian President Mohamed Ould Cheikh El-Ghazwani, who presided over the opening ceremony of the festival on Friday, praised the historical role of the city, which “has been able, over successive eras, to be an active economic center, a bridge between North and sub-Saharan Africa- Thanks to the genius of its scholars, their high spirits, and their abundance.” El-Ghazwani said.

The festival in its 10th edition was launched by President El Ghazouani who called on Mauritanians to put an end to the discourse that sows the seeds of division.

"People emigrated for economic reasons, for educational reasons, to teach their children. So, we said to ourselves that we must, first of all, give these populations the means to live decently so that, when we conserve the monuments, they can stay there, otherwise it will be a lost operation. You spend millions to restore monuments that will not be inhabited by anyone" one of the particpants at the festival told Africanews journalist Wahany Sambo.

The festival celebrates the ancient cities of Ouadane, Chinguitty, Tichitt and Oualata classified as World Heritage by UNESCO and also serves as a business meeting for many Mauritanians like this engineer in renewable energy.

"The Ouadane festival is very important because it is a festival dedicated to tradition. I come here to present my project, SP Gaz, the production of gas from organic waste. I presented it in front of the president and if God is pleased it will work" one of the participants said.

Sambo reports that that in Ouadane, a mythical ancient city that has managed to keep its traditions intact and resist the many upheavals of history is agog with the festival.

"This festival takes Mauritania back to its origins and reminds us of the need for Mauritanians to preserve their culture, their heritage. And, as President Mohamed Cheikh El Gazhouani recalled, the union of the Mauritanian people" Wahany Johnson SAMBOU, special correspondent in Ouadane, in the North of Mauritania, for Africanews. 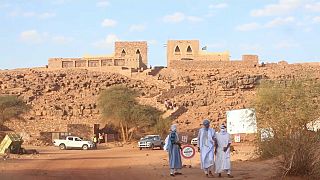