U.S. Secretary of State Antony Blinken opened his first official visit to Africa in Kenya with an appeal Wednesday for the preservation of democracy and inclusion in politically and ethnically fractured societies.

His message was delivered amid worsening crises in neighboring Ethiopia and Sudan.

With insecurity wracking both of those countries, Blinken began a three-nation African tour in a country with its own turbulent history of democracy.

Kenya will face another test of stability in a presidential election next year yet has emerged as a player in attempting to ease the growing Ethiopian conflict.

Before meeting President Uhuru Kenyatta and other senior Kenyan officials, Blinken spoke with civic leaders about the importance of combating what he termed “democratic recession” around the world, including challenges in the United States that show “just how fragile our democracy can be.”

“This is an important time,” he told a small group of human rights, labor and anti-corruption advocates at a Nairobi hotel. “Around the world, we’ve seen we’ve seen over the last decade or so what some have called 'democratic recession.”

“Even vibrant democracies like Kenya are experiencing these pressures, especially around election time," Blinken said, alluding to the presidential election set for August 2022.

Blinken is looking to boost thus-far unsuccessful U.S. diplomatic efforts to resolve the deepening conflicts in Ethiopia and in Sudan and to counter growing insurgencies elsewhere, like Somalia.

His visit to Kenya, Nigeria and Senegal this week follows months of Biden administration attempts to ease both situations that have yet to bear fruit despite frequent lower-level interventions. 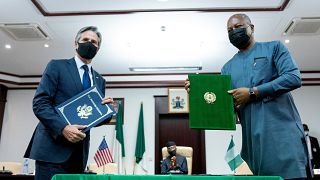