As climate change takes its toll in Madagascar, the country's environment minister believes that the issue of financing is crucial in the fight for better living conditions.

The south of country faces famine as the result of a prolonged drought that has affected more than 1.3 million people.

"Although the State has started its adaptation projects with its own funds, it is clear that the question of financing is crucial: to rebuild the territories that will be below sea level, to face the massive desertification that is taking place in the south of Madagascar, to prevent these populations from moving elsewhere and destroying Madagascar's unique biodiversity: the baobab, the lemurs that are endemic symbols of Madagascar's, unique in the world", said Baomiavotse Vahinala Raharinirina, Madagascar's environment minister.

Speaking at COP26 in Glasgow, the minister appealed for climate solidarity in the face of rising challenges.

"We must go beyond the individual positioning of each country and it is up to these countries to organise this collective decision and that is why we are gathered here.
We set up COP because we still believe in the world's capacity to gather and take decisions in an intelligent way. If you have to do it bilaterally it will take much longer", concluded the minister.

Last week the UN announced that nearly 30,000 people were now officially affected by famine in the country.

More than 1.3 million others are considered to be in a food security crisis or emergency. 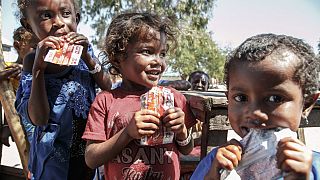