General Gilbert Diendere, a key defendant in a trial over the 1987 assassination of Burkina Faso's revolutionary leader Thomas Sankara, pleaded not guilty at the landmark proceedings on Tuesday.

The trial, unfolding in a military court in the capital Ouagadougou, is being avidly followed in a country where Sankara's brutal death 34 years ago casts a long shadow.

Diendere was allegedly an architect of a coup during which Sankara was killed and his former friend and comrade Blaise Compaore came to power.

"I plead not guilty on all four counts," Diendere said, dressed in military uniform.

Sankara and 12 of his colleagues were gunned down by a hit squad on October 15 1987 at a meeting of the ruling National Revolutionary Council (CNR).

Diendere said that on the afternoon of that day, he had gone to a "sports field" at the CNR's headquarters.

He then "heard gunfire" and spoke to two soldiers he knew, who said they had "taken steps to prevent" Sankara from arresting their "boss", referring to Compaore.

After the coup, Diendere became the right-hand man to Compaore, who ruled for 27 years before being deposed by a popular uprising in 2014 and fleeing to neighboring Ivory Coast.

Compaore faces the same charges as Diendere but is being tried in absentia. He has long been suspected of ordering Sankara's killing -- an allegation he denies.

Recounting his conversation with the two soldiers, Diendere said: "I asked (them) if Blaise was aware of what they did -- they replied negatively."

He said Compaore arrived on the scene in the late afternoon, three hours after the bloodbath.

Prosper Farama, a lawyer for the Sankara family said there was plenty of evidence showing that Diendere's version of events "didn't hold water".

"We don't believe he pulled the trigger, but he was the direct supervisor of all these operations, the men who acted were under his command and the place where the drama took place was under his responsibility," the lawyer said.

Diendere, 61, has been separately handed a 20-year term for his part in a 2015 plot to overthrow the post-Compaore transitional government.

Sankara was an army captain aged just 33 when he came to power in a coup in 1983.

A fiery Marxist-Leninist, he railed against imperialism and colonialism, often angering Western leaders but gaining followers across Africa and beyond.

Sankara tossed out the country's name of Upper Volta, a legacy of the French colonial era, and renamed it Burkina Faso, which means "the land of honest men".

He pushed ahead with a socialist agenda of nationalizations and banned female genital mutilation, polygamy and forced marriages.

His killing was a taboo subject in Burkina Faso throughout the Compaore era, and many of his followers remain angry his assassins have gone unpunished.

Fourteen men, including Compaore, are on trial in the proceedings, which began on October 1 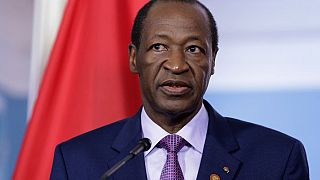