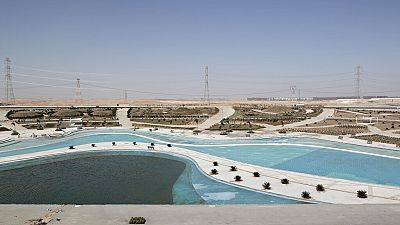 Egypt's president on Wednesday ordered his administration to start moving its offices next month to a sprawling new administrative capital in the desert outside Cairo, a spokesman said.

President Abdel Fattah el-Sissi directed the government to begin a six-month trial period of working from the new complex starting Dec. 1, according to his spokesman, Bassam Radi.

The $45 billion city is biggest of the mega-projects el-Sissi has launched since taking office in 2014. It is being built on 170,000 acres about 28 miles (about 45 kilometers) east of Cairo and nearly twice its size. It is planned to house 6.5 million people.

Critics have critised the new capital calling it a vanity project, arguing its cost could have been channeled into other developmental projects in the country.

But the government has argued that the new capital is needed to absorb the booming population of Cairo, which is projected to be about 40 million by 2050. The president also said that the new capital, and other projects ranging from new roads and housing complexes to a Suez Canal expansion, attract investors and create jobs for the country's more than 100 million people.

The city will house the presidency, Cabinet, Parliament and ministries. The new city is expected to have a 21-mile-long public park, an airport, an opera house, a sports complex and 20 skyscrapers, including Africa's highest, at 345 meters (about 1,132 feet).

There are plans for the government to relocate 52,300 government employees to the new capital by mid-2020, but its plans were delayed by the coronavirus pandemic.

El-Sissi said earlier this year that moving the government to the new capital would ``herald a new ear of modern government work.'' He was referring to advanced technology used to build government offices there.

The shift of the seat of power outside Cairo will be the first since the Muslim conquest in the 7th Century.