A landmark case that incited Tunisia's MeToo movement, in which a lawmaker faces charges of sexual harassment and public indecency, began on Thursday.

It started in 2019 when a school girl published photos on social media claiming that lawmaker Zouhair Makhlouf was performing a sexual act in his car outside her high school.

Feminist activists held a protest outside the courthouse, shouting My body is not a public space.

feminist activist and executive director at Aswat Nissa, Sarra Ben Said encouraged women to speak up regardless of who their oppressors are. "Today, the aggressor is a representative of the people who had substantial power in the region where he's being put on trial. We wanted to tell women that whatever powers your aggressor uses against you or has on you, you can always seek justice and retribution."

Makhlouf, who has denied all charges, failed to appear before the court, say his mother had taken ill and had to take her to the hospital since he was the only one in the family with a car who could take her to the clinic.

He explains that this is the worst form of injustice he has ever faced.

" I was imprisoned under the Ben Ali dictatorship three times, but this is the worst injustice I've suffered. They massacred my personality, they drew me as a devil, but I will say that it's good to have an energetic civil society. But they've done damage, they don't listen to both sides, they only look at things from one angle."

Lawyer of his accuser, Naima Chabbouh, said it was time for justice to decide on this “protracted case.”

The hearing is set to resume Nov. 11.

According to a 2017 report by the Tunisian Center for Research, Studies, Documentation, and Information on Women, in about 97% of sexual harassment cases the victim does not file an official complaint.

In 2017, the Tunisian parliament passed a law outlawing any form of violence against women and girls. This in theory makes it easier to prosecute domestic abuse and impose penalties on sexual harassment in public spaces. 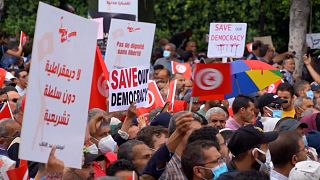