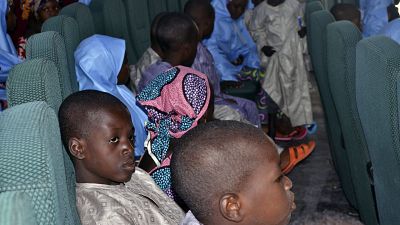 Nigeria's President Muhammadu Buhari said 12 million children are scared of going to school in the country, where jihadists and heavily armed criminals have kidnapped hundreds of students for ransom.

The first mass school abduction in Africa's most populous nation was in the northeast in 2014, when Boko Haram jihadists snatched 276 girls from Chibok, triggering a global campaign called #BringBackOurGirls.

Since then, attacks on schools "have grown in number and spread across the northern part of the country," said Buhari, addressing on Tuesday a conference on safety in education in the capital, Abuja.

Gunmen in northwest and central Nigeria have increasingly targeted schools, kidnapping more than 1,000 students since December.

As a result, said Buhari, "there are more than 12 million children currently traumatized and afraid of going to school". Girls were particularly affected, he added.

Young girls who leave school early are at risk of being married off, experts warn.

Save the Children said earlier this month that an "estimated 44 percent of girls in Nigeria are married before their 18th birthday, one of the highest rates of child marriage globally."

Most kidnapped students are released after negotiations with their captors.

But "even when the abducted students are released," Buhari said, "the trauma of the incidences remain long in their minds."

The retired general, first elected in 2015, said the government was "highly committed to prioritizing safety in schools."

"We have identified and put mechanisms in place... to ensure the safety and security of schools in Nigeria," he said.

But it "has been tough dealing with these security challenges and their effect," the 78-year-old added.

Military operations are underway across the country, but security forces are often described as overstretched and overwhelmed.