Southern Madagascar faces the worst famine in its history.

According to UNICEF, 20% of children suffer from malnutrition.

The famine was caused by a plague of locusts in 2020 that destroyed all the crops.

"We did active screening in each district and we found that 20% of children are malnourished. This is beyond the tolerance threshold and we are now in the emergency phase"says Armand Rakoto, Unicef representative in southern Madagascar.

Thanks to an urgent government programme to fight famine in this hard-hit part of the island, school canteens have been set up to enable starving children to eat well while attending classes.

Responding to the crisis the ministry of agriculture launched an initiative that provides those who have lost everything with land in dry areas irrigated by a drip system powered by solar energy.

"They will produce food and we will help them. The food will be stored in a food bank to be used as a safety stock but also to be able to use this stock when the drought comes", promises Harison Edmond Randriarimanana, Minister of Agriculture and Fisheries.

The UN's World Food Programme defends an intelligent approach to agriculture in order to face the challenges posed by climate change.

"According to the availability or not of water, given the characteristics of the land and so on it's important to grow what works better. The main thing is that's climate-smart agriculture. But it has to be accompanied by nutrition-sensitive agriculture" defends Boliko Mbuli Charles, World Food Programme's representative in Madagascar.

The UN agency appeals for more funds to help fight famine and prevent new plague of locusts in southern Madagascar.

"If we don't take steps in the next few weeks to stop the development of the migratory locust, all our efforts in terms of agriculture could be compromised next year. We need emergency support, we need USD$ 6,800,000, some of which could be available much later, but we need this money to be available now so that we can do what is necessary to avoid a resurgence of the locusts nex year". 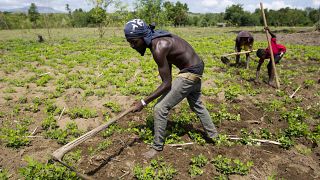