Some women groups in Benin have welcomed the legalization of abortion in the country.

The law on sexual and reproductive health passed late Wednesday October 20 said women will be able to terminate pregnancies up to 12 weeks.

Angela Kpéidja is president of a non-governmental organization DO NOT BE AFRAID, which focuses on championing the welfare of women and girls.

She explains this decision instills a level of confidence in women.

"I am very, very happy that from now on, we can give this right back to the woman, to decide for herself. For a long time in our country, the woman was subject to decisions taken by her husband. Today, if you want to have an abortion, you can go to a hospital and if you meet the conditions defined by the law, you will be able to do it and avoid health risks."

Benin's health ministry had earlier in a report stated that nearly 200 women die annually from abortions and 20% from unsafe abortions in the West African country of more than 12 million people.

For some of these women groups this is part of their motivations in supporting the new law. Senior social worker Ariane Adjolohoun says this measure will be a relief for many women who face undesired pregnancies.

"Even doctors at times are forced to choose between the life of the mother or the life of the child and I don't think that there are many on this earth even in our most traditional families, many people who say, listen, sacrifice the mother and bring us the child."

Before this law, abortions were previously authorised in the country if pursing the pregnancy "threatened the life of the mother", was "the result of a rape or incest" or when "the unborn child has a particularly severe affection".

Under the new law, abortion "can be authorised" within the first trimester if it is likely to cause material, educational, professional or moral distress, incompatible with the woman or the unborn child's interest."

Several countries in Africa have total bans on abortion, including Congo-Brazzaville, the Democratic Republic of Congo, Djibouti, Egypt, Guinea-Bissau and Senegal. 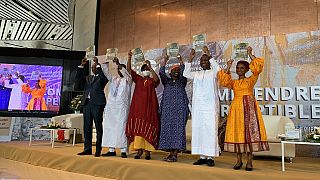