The trial in the case of the assassination of human rights defenders Floribert Chebeya and Fidèle Bazana in June 2010 in Kinshasa took another twist on Wednesday when one of the accused confessed to the two murders.

The former Lieutenant Jacques Mugabo confessed on Wednesday that he directly orchestrated the two murders with the help of other security members led by Christian Kenga Kenga.

He further detailed how, in turn, the rights activists Fidèle Bazana and Floribert Chebeya were restrained, their hands handcuffed behind their backs and later suffocated with plastic bags.

The other co-accused Colonel Christian Kenga Kenga, who has been imprisoned for more than a year, refused to appear in court despite the summons.

Five police officers have been convicted for the murder, three of them in absentia.

Numbi who was suspended shortly after Chebeya's murder was placed under US and European sanctions in 2016, for a police crackdown on protests in the region of Bas Congo.

According to several sources, Numbi had fled to Zimbabwe just after the incident. DRC later issued an arrest warrant and were looking to have the General extradited to be questioned by prosecutors on his role in the murder. 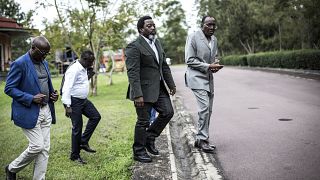