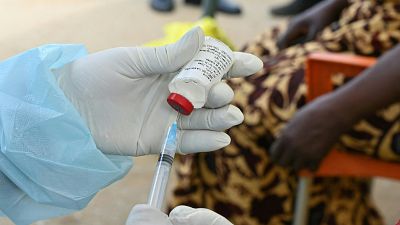 Dengue affects tens of millions each year, producing the brutal symptoms that earned it the moniker "breakbone fever," but new research may have found the first-ever treatment for the virus.

Tests in cell cultures and mice found that a newly identified compound can effectively disarm the virus, stopping it from replicating and preventing disease, according to a study published Wednesday in the journal Nature.

And it appears to be effective whether taken protectively before infection or as a treatment after the virus is contracted.

It is an "exciting" development in the battle against dengue, according to Scott Biering and Eva Harris of the University of California, Berkeley's School of Public Health.

It "represents a major advance in the field of dengue therapeutics," the pair, who were not involved in the research, wrote in a review in Nature.

There is no doubt about the threat posed by the mosquito-borne dengue virus, which is estimated to infect at least 98 million people a year and is endemic in 128 countries worldwide.

It can cause intense flu-like symptoms, and sometimes develops into severe dengue which can be fatal.

And because there are four different strains of the virus, infection with one doesn't protect against another, and catching dengue a second time is often more serious.

No treatment exists so far, with efforts focusing instead on reducing transmission -- including a programme that infects mosquitoes with a disease-resistant bacteria.

A vaccine called Dengvaxia is approved for use only in some countries and is effective against a single strain.

Enter the unassumingly named JNJ-A07, a compound found by screening thousands of potential candidates, in a process researcher Johan Neyts described as like "looking for a needle in a haystack."

It turned out to be worth the wait.

Its effect "in infected animals is unprecedented," Neyts, who helped lead the research, told AFP.

"Even if treatment is started at the time of peak viral replication there is important antiviral activity," added Neyts, a professor of virology at the University of Leuven, Belgium.

JNJ-A07 works by targeting the interaction between two proteins in the dengue virus that are key to its replication.

Tests in cells, including from mosquitoes and humans, found it worked against all four dengue strains.

Dengue can evolve quickly, and so the team also examined how JNJ-A07 would fare as the virus mutates.

"It took us in the lab, in infected cells, almost half a year before we could obtain important resistance (to the treatment)," said Neyts.

"Given that the barrier to resistance is so high, it is very unlikely that this will clinically be a problem."

Intriguingly, the mutations that caused resistance also appeared to make the virus incapable of replicating in mosquito cells.

That could suggest that even if the virus develops resistance to treatment with JNJ-A07, it would no longer be transmissible via mosquitoes, effectively reaching a dead end in its host.

Promisingly, the compound was effective whether administered to mice before infection or afterwards.

The version of the compound reported in Nature has now been "further slightly optimised" and is in clinical development by Johnson & Johnson, Neyts said.

Various questions about JNJ-A07 remain, including whether it would be more effective if paired with other compounds, wrote Biering and Harris.

Another potential issue is whether it could increase vulnerability to reinfection.

When people contract dengue, the presence of the virus in their blood -- known as viraemia -- generally stimulates a potent immune response that protects them from future infection.

But in some people, the immune response is weaker and that leaves them vulnerable to reinfection with different strains, which can produce more serious symptoms.

Given that JNJ-A07 works to reduce viraemia, Biering and Harris cautioned that research is needed into whether this might leave people more susceptible to reinfection.

Despite the unknowns, Neyts said the study offers exciting possibilities.

"Seeing the compound work so potently in animals was breathtaking," he said, describing the research as "an amazing ride."