Congolese President Felix Tshisekedi has demanded an evaluation of projects linked to the "Sino-Congolese" contract signed in 2008 by his predecessor Joseph Kabila in the Democratic Republic of Congo (DRC), official sources said on Saturday.

The head of state has asked the Minister of Infrastructure and Public Works "to present the state of play of the technical and financial execution of the projects included in the so-called Sino-Congolese contract, and the Minister of Mines to do the same in her sector", at the next meeting of the Council of Ministers, said government spokesman Patrick Muyaya on state television, RTNC.

The DRC "has a significant deficit in terms of infrastructure. This reality constitutes an obstacle to its development," he added, reading a report of the council of ministers held on Friday.

"It is in this spirit that in 2008, in order to capitalise on all available sources of infrastructure funding, the country signed the Sino-Congolese contract," the Congolese government spokesman said.

The former president Kabila (2001-2019) had negotiated in 2008 a contract in the form of barter - cobalt and copper in exchange for the construction of infrastructure - with a Chinese consortium for an amount of 9 billion dollars, renegotiated to 6 billion under pressure from the International Monetary Fund (IMF). To date, nearly $2.74 billion has been disbursed by the Chinese side, mostly in the form of investments.

"The execution of major infrastructure projects under this contract had been interrupted for technical reasons related in particular to the lack of electrical power for mining production," said Mr Muyaya. "With this problem resolved by the imminent launch of the Busanga power plant, implementation of these projects should be restarted without delay.

In mid-May, during a visit to the southeastern mining town of Kolwezi, Mr Tshisekedi announced his intention to renegotiate mining contracts, including those concluded with China by Mr Kabila. 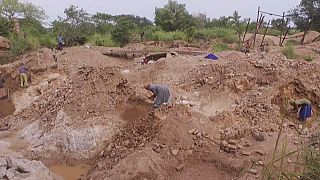