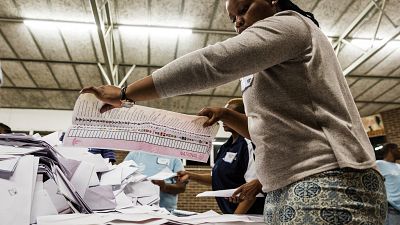 The vote for municipal representatives -- initially set for October 27 -- will take place in the aftermath of deadly unrest and looting that followed the jailing of ex-president Jacob Zuma in July, the worst bout of violence in South Africa since the end of apartheid.

It will test the popularity of the embattled African National Congress (ANC) party, divided into factions in the face of corruption allegations against some of its senior officials, including Zuma.

Rolling coronavirus restrictions of the past 18 months have also worsened unemployment and inequality in an already ailing economy.

The ANC led the fight against apartheid and has ruled the country since the advent of democracy 27 years ago.

But it is struggling to regain its former glory and suffered an unprecedented drop in votes during general elections in 2019.

In July, diehard Zuma supporters staged violent unrest and were joined by ordinary citizens in ransacking shopping malls and warehouses, dealing a crippling blow to the economy and its attractivity to investors.

A poll by global research group Ipsos released this week found that less than half of surveyed registered voters were likely to cast their ballot for the ANC in the upcoming elections.

The electoral commission (IEC) had suggested postponing the polls to 2022 because of the pandemic, but the Constitutional Court dismissed the move, ordering that they be held by November 1.

The attempt to delay the vote raised eyebrows among opposition parties, particularly after the ANC failed to register hundreds of candidates before an August 23 deadline because of striking staff and technical glitches.

Critics have accused the IEC of bias over the extension.