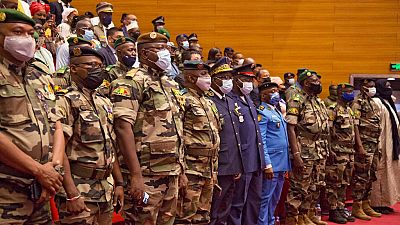 Mali's colonels have consistently said they will hand over power to civilians in early 2022, but doubts are growing about whether that timetable will be met six months before the promised elections and after a year of transition that has been deemed unproductive.

The military in power since the August 2020 coup and the second transitional government they installed in June following a new coup de force, have so far repeated that they will stick to the transition timetable announced in April.

This ambitious timetable calls for a constitutional referendum on October 31, regional and local elections on December 26, and the first round of presidential and legislative elections on February 27, 2022.

The international community considers the restoration of constitutional order to be essential to overcome the deep security, social and economic crisis into which this country, which is crucial to the stability of the Sahel, has been sinking for years.

However, two months before the first scheduled referendum, the transition has already missed several deadlines. No draft constitution has been submitted to the National Transitional Council set up by the military to act as a legislative body. This should have been done in July, according to the timetable made public in April.

The voter registration lists should also have been revised in July and audited in August. The authorities gave no indication that this had been done.

The decree convening the electoral body is supposed to be issued on September 15. There is no indication at this point whether or not it will be.

In the absence of progress, people seem to be resigned to the possibility of postponing the February elections, in contradiction with the colonels' initial commitments, but also with the constantly reiterated expectations of the main foreign partners who support Mali in the face of jihadist groups.

The arrest on May 24 of the transitional president and his replacement by Colonel Assimi Goïta have already damaged the credibility of the military in the eyes of the international community.

The political class and civil society complain about the immobility and lack of inclusiveness of the transition.

"Not much is moving forward except for the organization of big meetings to make a point," says an expert on electoral issues in Bamako.

"What the transition lacks is not time, but the will to act," said Adam Dicko, a member of civil society and organizer of a Citizen's Café in the capital.

Former Prime Minister Moussa Mara, during the same debate, hammered that "we must be pragmatic": there is no point in criticizing the transition, which he himself describes as "divisive and non-inclusive", we must help it "go to the planned elections".

It remains possible if we decide to keep the "secondary" elections for later. The presidential election is possible," he said. In any case, "it is time for the government to tell us what is going on".

For the time being, while waiting for the National Conferences of Refoundation (ANR), announced for the coming weeks, the political class is arguing over the modalities of the ballot.

The debate focuses on the creation of a single body to manage the elections, instead of various bodies.

A majority of parties have spoken out against this reform, promised by Prime Minister Choguel Kokalla Maïga when he announced his government's action plan at the end of July, denouncing it as a "rush job" and deeming it unworkable. Many have called for its abandonment.

The only emerging consensus is the need to publish a new electoral calendar, which should be "clear, precise and realistic," in the words of Ibrahim Sangho, leader of several election observation platforms in Mali.

Diplomats fear that the transition will inevitably drag on. They point to some recent sporadic demonstrations in Bamako and Nioro du Sahel (northwest) calling for an "extension. These demonstrations have not yet attracted large crowds.

For teacher-researcher Boubacar Haidara, "taking advantage of strong popular support" would be the only way for the military to legitimize an extension of the transition "in the face of a united political class and an international community that does not want to hear about an extension.

He added that "the fight against corruption launched a few days ago" with the arrest and imprisonment of former Prime Minister Soumeylou Boubèye Maïga, could be part of this logic.