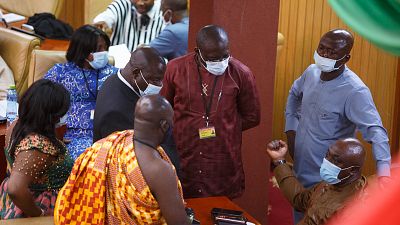 In Ghana, a highly religious country that claims to be exemplary in Africa in its respect for human rights, a handful of opposition MPs are putting the president in a difficult position by promoting a law restricting the rights of sexual minorities.

Same-sex relationships are banned in the West African nation, but no one has ever been prosecuted under this colonial-era law.

However, LGBT+ people are widely discriminated against in Ghana.

In early August, a bill was introduced in parliament to further restrict the rights of LGBT+ people.

It includes criminalizing the defense of LGBT+ rights, a duty to report "suspects", the promotion of conversion therapy and the imposition of harsher prison sentences for homosexuality.

If the bill is passed by parliament, President Nana Akufo-Addo could either sign it into law or veto it.

The international community and rights activists have widely condemned the bill, which was submitted to parliament by seven opposition MPs and one member of the presidential party.

"Passing this law in its current or even partial form would violate a significant number of human rights, including the absolute prohibition of torture," a UN panel of experts said in a statement.

"This will not only criminalize LGBTI (I for intersex) people but also all those who support or show sympathy for human rights," they added.

But analysts and diplomats say it will be difficult for the president to oppose the bill, given its popularity in Ghana.

About 90% of Ghanaians say they support a law criminalizing same-sex relationships, according to a 2014 poll by research group Afrobarometer.

"The opposition party is using this proposed law as a political tactic to force the current government to take a stand," the Human Rights Watch (HRW) researcher Wendy Isaack said.

President Akufo-Addo, who was re-elected for a second term in December, has said he would not legalize same-sex marriages.

But with this law, the former human rights lawyer, who studied in Britain, finds himself at odds.

"It's obvious that the president is not thrilled with this reform, but it's a delicate issue, because of the general opinion," a western diplomat who wishes to remain anonymous told AFP.

"The opposition has a red carpet to ride on this wave and make a particularly demagogic bill," another diplomat said.

The parliamentarians in favor of the bill say that homosexuality doesn't get along with Ghanaian culture.

"We need to protect our children who are being targeted by these LGBTQ+ people who are making them believe that this is a new way of life," said one of its proponents Samuel Nartey George.

The debate comes at a time when the president is trying to attract African-Americans and Ghanaians from the diaspora to settle in the country.

Renowned for its democratic stability and respect for rights, Ghana has been successful in bringing companies like Twitter to the country, which recently said it would soon open its first office in Africa.

"If we are applauded so much, it is not for nothing, but because we are a free society," says Henri Kwasi Prempeh, director of the Ghana Center for Democratic Development.

"But it's complicated because religious institutions are very powerful.

By adopting this law, Ghana would follow the same path as Nigeria and Uganda.

Human rights defenders are concerned that these laws indirectly encourage discrimination and attacks.

"Some are attacked in the streets, are not treated in hospitals, are chased out of their schools or even their homes," says Mr. Isaack.

According to Mr. Bediako, the debate alone "has already led to an increase in homophobia".