Several African leaders on Thursday attended the International Development Association (IDA) for Africa summit in Abidjan to discuss ways to support economic recovery on the continent after the crisis caused by the Covid-19 pandemic.

Many countries, already seeing little growth, have been forced to roll back restrictions due to rising virus cases, affecting revenues and jobs.

An official of the IDA, a World Bank fund that provides loans and grants to poor and developing countries spoke about the need to ramp up vaccinations in Africa.

"We are far from the target to vaccinate 40% of the population by the end of this year and 60% by the middle of next year," said Axel van Trotsenburg, the World Bank's director of operations.

The continent has administered just 57 million vaccines and only 1.2% of its population of 1.3 billion is fully vaccinated, according to the African Union's Centres for Disease Control (CDC).

IDA is one of the largest sources of funding for fighting extreme poverty in the world’s lowest-income countries. 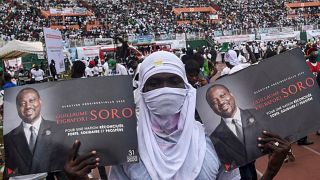 What now for reconciliatory efforts in Ivory Coast?

What now for reconciliatory efforts in Ivory Coast?