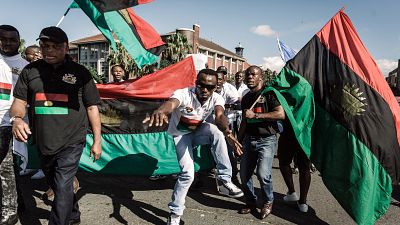 The Independence Movement for the Indigenous People of Biafra (Ipob), which advocates the secession of southeastern Nigeria, called Wednesday for "justice" and a "fair trial" after the arrest of its leader Nnamdi Kanu.

The Ipob leader was arrested in an unknown location after four years on the run and brought back to Nigeria to face trial, authorities said.

The 53-year-old, who has been missing since an army raid on his home in late 2017 while on bail, was brought to court on Tuesday, which authorized his incarceration and announced that his "terrorism" trial would be held in July.

A spokesman for the British High Commission in Abuja, the Nigerian capital, said "Kanu was not arrested in the UK (where he was rumored to be during his escape, ed.) for extradition purposes."

The Ipob, founded by Kanu in 2013, called Wednesday for a fair trial for its leader. "We remind the Nigerian government and its security agencies that our leader deserves justice and a fair trial," its spokesperson Emma Powerful said in a statement.

"We also state unequivocally that no harm should come to our leader. If anything untoward happens to him, the Nigerian government will be held accountable," he added.

The former Biafra, a deprived region in the southeast mainly populated by the Igbo community, was the scene of a bloody civil war between 1967 and 1970.

After the death of more than a million people, notably from famine, and the failure of the rebellion, the "Republic of Biafra" was finally reintegrated into Nigeria, a country of nearly 200 million inhabitants regularly shaken by intercommunal tensions.

But the desire for independence has not disappeared. The arrest of Nnamdi Kanu comes after months of unrest in the region and the creation of a regional paramilitary movement.

At least 127 police and security forces have been killed and some 20 police stations and electoral commission offices have been stormed since the beginning of the year, according to local media.

IPOB rejects all accusations of violence.

"I can assure you that Kanu's arrest will not stop the Biafran struggle," Kelechi Emenogu, a resident of Okpala, told AFP.

"What crime has Kanu committed? They are just against the Igbo people," said Ogochukwu Emenogu, a resident of Enugu