Suez Canal: "Initial" compensation agreement after Ever Given blockade 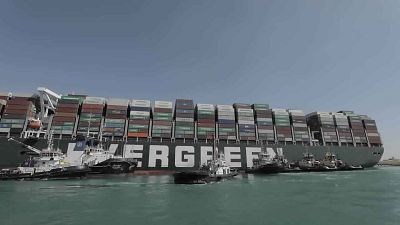 An "initial" agreement on compensation has been reached between Egypt and the owner of the Ever Given container ship that blocked the Suez Canal, a crucial shipping lane for international trade, at the end of March, the head of the Canal Authority (SCA) said.

"We have reached an initial agreement after intense negotiations between the authorities, the ship's owners and insurers," Ossama Rabie said in a television interview with DMC on Wednesday evening.

According to the Egyptian official, the two parties are now putting the "final touches" to the agreement, which could be signed "in the middle of next week".

With a capacity of more than 200,000 tonnes, the Ever Given ran aground on 23 March, blocking traffic on the canal, through which nearly 10% of world maritime trade passes, according to experts.

The blockage lasted six days. According to the Suez Canal Authority (SCA), Egypt lost between $12 million (€9.8 million) and $15 million (€12.5 million) per day of closure.

One of the insurers, UK Club, also announced in a statement that an agreement in "principle" had been reached between the parties.

"Together with the shipowner and its other insurers, we are now working with the SCA to finalise a signed agreement as soon as possible," the statement said, adding that the signing of the agreement should then lead to the release of the ship, which has been held by the Egyptian authorities since March.

UK Club has insured the owner of the Ever Given for certain damages. The vessel itself and its cargo were insured separately.

However, no information was disclosed on the amount of compensation, with Mr Rabie saying that the parties had agreed not to disclose anything until the agreement was actually signed.

A total of 422 ships, carrying 26 million tonnes of cargo, were blocked in March. 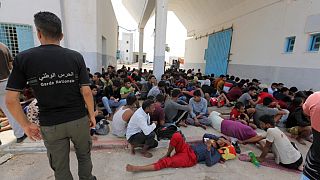 Over 250 migrants rescued by Tunisian navy are in quarantine

Over 250 migrants rescued by Tunisian navy are in quarantine