The Cameroonian and Philadelphia 76ers star Joel Embiid is expected to undergo a Magnetic resonance imaging MRI scanning after he suffered a knee injury.

On Monday Embbid’s side, the Philadelphia 76ers lost 122-114 to the Washington Wizards.

Embiid has suffered a lot of injuries in the last five seasons missing at least 18 games each.

Until Embiid can get back in the lineup, Dwight Howard will likely see more playing time.

Embiid has averaged a team-high of 29.3 points per game through the first three games of the series.

Embiid missed a chunk of time during the regular season due to a bone bruise in his left knees, making him more vulnerable given that this latest injury is on the right knee.

The Sixers are yet to take care of business without him and more updates will be issued concerning his health. 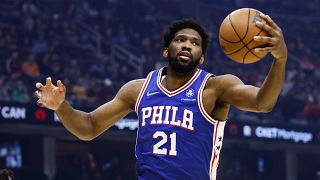