As a result of the modification of their environment, with the introduction of human made hives and human activity such as the development of intensive monoculture agriculture, the existence of bees is now endangered.

Every year, 30% of hives die as a result of the use of pesticides.

A worrying figure, as bees play a central role in nature.

According to the International Union for Conservation of Nature, up to 90% of the world's wild flowering plants originate from the pollination activity of bees and other pollinating insects.

The African Wild Bee Institute warned that should wild bees go extinct in Africa, both the continent's fauna and flora, that heavily depend on the insect's presence, would be severely impacted. 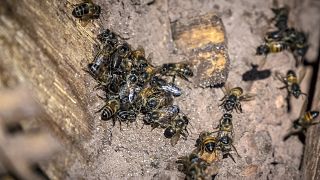