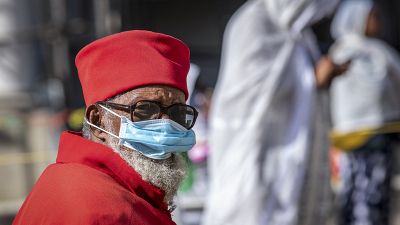 As they have done for hundreds of years on the Orthodox Easter weekend, priests wrapped in traditional white robes read the Bible by candlelight on Saturday evening in the rock-hewn churches of Lalibela in northern Ethiopia.

The ancient ritual has been a tourist draw in recent years.

Tens of thousands of visitors from around Ethiopia and abroad usually come to Lalibela, home to a UNESCO World Heritage site of 12th and 13th century monolithic churches, to celebrate and witness the most important holiday in the Orthodox calendar.

But they were missing this year. Even many local worshippers stayed home, reflecting the impact of the COVID-19 pandemic and of a war in the Tigray region, further north, that broke out in November. The government declared victory at the end of that month, but since then there has been some low-level fighting in parts of that region, which borders Amhara where Lalibela is.

The lack of tourists has been hard on Lalibela. The town, with a population of 20,000, has become a star attraction for the foreign visitors to Ethiopia whose numbers have steadily grown over the past decade.

"Back in the good days tourists were flowing, hotels were full," Misagnaw Tarekegn, head priest of Saint Mary church, said as barefoot worshippers gathered around him in preparation for the night of prayers and chants before Easter morning.

"Many hotels had 300 to 400 workers. Now they are sitting at home with no income," he said, blaming the pandemic and the war in Tigray.

Mesai Mekonnen, owner of the Tukul Village hotel, said that before the pandemic the hotel typically hosted 600 guests a month - now his rooms are empty and the kitchen is closed.

"Lalibela depends on tourism: the hotels, the souvenirs, the cafés, the shops, the farmers all directly or indirectly benefit from tourism. Now everything is closed. We have no income."

Tourism worldwide collapsed amid pandemic restrictions and travel curbs. In Ethiopia, as part of coronavirus measures, the government ordered the Lalibela churches closed to tourism for the first time from March to September last year.

Fewer than 600 tourists have visited since the churches reopened, according to Haftamu Tesfaw, an official at the Lalibela tourism office.

"We pray God to bring these things to an end"

Ethiopia is currently in the top five countries in Africa in terms of new COVID-19 infections, straining the health system, although new daily cases are falling from a peak in early April.

With a population of over 110 million, the country has recorded a total of more than 258,000 infections and about 3,700 deaths.

Misganaw, the priest, shared his hopes for this year's "Fasika", the Amharic word for Easter.

"We pray God to bring these things to an end."