The long-time opposition leader in Chad has claimed that his calls for the boycott of the recently held presidential election was honored.

"We got what we wanted. Chadians did not vote. Chadians did not elect Déby. He will do what he wants with it. This time again, by a game of circumstances, he is going to win the election, perhaps granting himself a six-year mandate, which I think is one too many and which I think he will not be able to exercise with peace of mind", Kebzabo said.

President Deby’s campaign for their part praised the turn out for Sunday’s vote, in which the longtime leader is guaranteed a win. 68-year old Deby, is the frontrunner in a six-candidate race without major rivals. During campaigns, protests were banned or dispersed.

In the lead up to the polls, Chadian youth expressed apathy towards the civic exercise, describing the end result as a mere ‘’theatre’’.

President Idriss Deby Itno is widely expected to win re-election for a sixth term, extending his three-decade-long rule in this central African nation after three top opposition politicians chose not to take part in the vote.

Another seven candidacies were rejected by the Supreme Court and three withdrew, including longtime opposition politician Saleh Kebzabo, who quit in protest over violence by the security forces.

A constitutional referendum approved several years ago means Deby can now serve two more terms and could stay in power until 2033.

The president's announcement to seek a sixth term in February sparked violent demonstrations.

Other than Deby, the five other candidates include Albert Pahimi Padacke, 55, a former prime minister under Deby, and Felix Nialbe Romadoumngar, 64, a newcomer to politics who is officially "leader of the opposition" as his URD party is the second largest in the National Assembly with eight seats, after 160 for Deby's PDS. 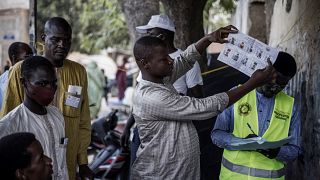