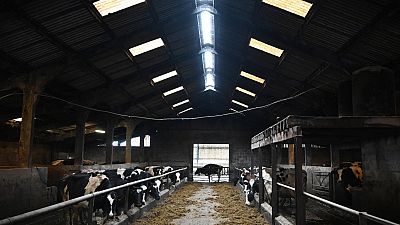 Some 350 dairy cows were left to starve to death at a state-funded farm in South Africa after it was found to no longer be in operation, South African media website News24 reported.

The Mantusini Dairy Project in Eastern Cape launched in 2014 with 500 cows and with 43 million rand from the regional and national governments. The aim was to benefit around 500 individual households under communal tenure.

But the site was found to no longer be operational and there are currently believed to be around 148 cows that are still alive and starving. They feed on natural pastures.

The cows had to be milked by hand as the electricity company Eskom disconnected its services to the farm as payments were not made.

The DA made the discovery and also found the cows had not been treated for ticks and other parasites and that there is no water due to a broken power cable.

It was also reported that 350 cows had died and their rotting carcasses had been left in the fields, feeding vultures.

Local commercial farmers have been donating some of their dip to treat the cows every now and then.

Community members were said to be angry because they had made their land available for the dairy farm and no profits have been forthcoming from the project. They are also furious as they feel there had been large-scale looting at the facility by government officials, said DA spokesperson Retief Odendaal.

He also said an audit will be demanded as to how the R43 million was spent and if there had been any financial impropriety.

Community members and the local chief are calling for government intervention in the project, said News24.