The alliance between the United States and Africa is set to change since Joe Biden's election. But what can we expect?

For more insight, Africanews spoke to Jeff Hawkins, who has served as the US ambassador to Bangui and as consul general in Lagos, Nigeria, and also leaving the State Department in 2017.

"This is going to be very good news for Africa," Hawkins said.

"Joe Biden is a president that comes to office with a great deal of experience. He is surrounded by a team of foreign policy experts who know the continent very well. And I would sort of call your viewers’ attention, particularly to two individuals. One is Linda Thomas Greenfield, who's going to the UN. Ambassador Greenfield was ambassador in Liberia.

"She was assistant secretary of state for African affairs. She knows the continent like the back of her hand. The other one is Samantha Powers, who's going to the USAID, and she also knows the continent very well. She's been very involved and will be a great friend to Africa over the coming years. And let's also not forget that secretary of state himself, Anthony Blinken, is not only somebody that's travelled to Africa on a number of occasions, but also speaks fluent French. So he'll be able to speak not only to the Anglophones on the continent, but the Francophones as well.’’

Question: Would agree that Biden is taking the office at a very challenging time and the fact that his focus right now would be on trying to deal with the pandemic, get the economy of the United States going. At what point do you foresee a policy direction that tailors towards Africa that didn’t happen over the last four years?

Answer: ‘’The new administration is starting to think about other places besides the United States," Hawkins said.

"And Secretary of State Blinken has already spoken on the phone with the foreign minister of South Africa, the chairman of the African Union, and they've discussed covid and vaccination issues. So even now, even in these first few days of the administration, they're starting to engage on covid. But let's be honest with each other that Biden has a lot of things to worry about, covid, the economy.

"He's not going to turn immediately to a big focus on Africa, particularly while he's still putting his Africa team together at the White House and at the State Department. But the change in tone is immediate. And he's already taken some initial steps. And you mentioned earlier the visa ban. He's already taken steps that he put out there even during the campaign to the African diaspora. He's also talked about a relationship with Africa that's far more respectful, which I think is really important....’’

Question: Biden had promised that he would rescind what has been known as the Muslim ban that Trump put in place when he took office in 2017. And Nigeria was affected, countries like Libya and then Somalia. These are predominantly Muslim countries within the African continent. And true to his word, he’s rescinded that ban. What does that mean for African Muslims?

Answer: ‘’The Biden administration is very concerned about recognizing the importance of diversity in the American scene, recognizing that we are a country of immigrants. It's not that the doors are just going to be flung open and there won't be any immigration policy at all. But it's going to be much more measured and certainly much more welcoming of people that are legally entitled to travel and to immigrate to the United States.’’

Question: Let's end with the crisis in Libya right now. We know that just last week the current government spoke against Russia and Turkey, asking them to pull out of the country. Are we going to see a critical role by the United States in Libya to resolve the crisis?

Answer: ‘’Well, I certainly think that diplomatically the Biden administration will do everything it can to help resolve that and to support the efforts of the UN and other actors there. I don't know how eager the administration is going to be to jump in with more than diplomatic muscle. But I think we'll certainly see that.’’

_Jeff Hawkins is currently a lecturer at the Institute of Political Science in Paris, France. _ 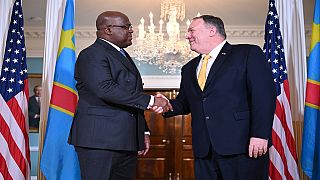