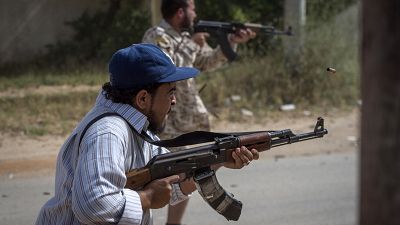 An agreement that provides for coordination in monitoring merchant ships suspected of violating an arms embargo against Libya by sharing satellite images and exchanging information was signed on Monday.

The working arrangement was signed during a virtual ceremony by Frontex’s Executive Director Fabrice Leggeri and Rear Admiral Fabio Agostini, the Commander of Operation IRINI.

The meeting was also attended by the director-general of Immigration and Home Affairs of the European Commission, Monique Barratt, according to a statement of the EU mission.

"Operation IRINI is an important partner for us, and Frontex will provide information to overcome security issues in the Mediterranean," the EU mission statement quoted Frontex commander as saying.

At the center of their agreement are exchanges of intelligence and expertise, particularly in the coordinated use of satellite images, analysis, mobilization of specialists and tactical coordination.

"This cooperation is an important tool, especially for the exchange of information on merchant vessels suspected of violating the arms embargo against Libya," said an Irini statement.

The Frontex agency specifies that it will share with Irini "information collected in the framework of its risk analysis activities, such as the surveillance of vessels on the high seas, and data from its aerial surveillance in the central Mediterranean".

Operation Irini, launched in April, has a mandate from the UN Security Council. Its area of operation in the eastern Mediterranean has been moved away from the routes used by migrant smugglers in Libya and its mission has been limited to monitoring arms and oil embargoes.

Libya has been plunged into chaos since the fall of Muammar Gaddafi's regime in 2011. Two authorities are vying for power, with foreign backings: the UN-recognized Government of National Unity in Tripoli and a power embodied by Khalifa Haftar, a strongman controlling the East.

The GNA is supported by Turkey, while the Haftar camp is backed by the United Arab Emirates, Russia and Egypt.

Turkey considers the Irini mission to be biased and accuses Europe of seeking through this mechanism to prevent the delivery of arms by sea destined for the Tripoli government, while ignoring those supplied to Khalifa Haftar by his allies by air and land.