Protesters march to condemn the government’s handling of school kidnapping crisis in Nigeria’s northwest on Thursday. The protesters in Katsina State joined the Coalition of Northern Groups, an Non-Governmental Organization, to demand accountability from government officials.

The group later held a press conference and handed a letter of demands to representative of the Katsina State Governor.

The group have used the hashtag #BringBackOurBoysNow to pile pressure on the government to act now.

The campaign is in reference to that of the Chibok girls in 2014. At that time, 276 schoolgirls were kidnapped, sparking global indignation.

After last Friday's abduction, two accounts by different officials have put the number of schoolboys missing at 320 or 333. A similar protest calling for the release of the boys also took place in the Nigerian capital Abuja on Thursday. 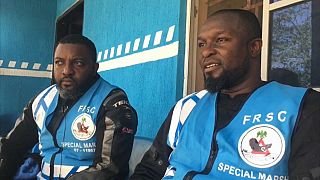