Young South Africans are calling for tougher coronavirus measures as the country reports a spike in cases and declared a second wave.

On Wednesday, South Africa reported 6,700 new cases, the highest since August, bringing the total number of cases since the outbreak to over 800,000 with more than 22,000 deaths.

The situation is expected to worsen as the festive season begins, with many travelling and celebrating.

"It's been a tough year, people want to party, but, you know, I think the government should put tighter restrictions on like gatherings because I see now the gatherings actually increased instead of decreased," said student Mohau Mkhabela.

"I think there was a bit of a mistake, a bit of a blunder on their side."

South Africa’s new wave is likely to spike so quickly that it could overwhelm hospital capacities in some regions, warned the country’s health minister Zweli Mkhize.

"This thing (COVID-19) was not moving as fast as it is right now, and I just think maybe it Eastern Cape, the hot spots, those four provinces, those that are called the hot spots, should be locked down and implemented level five lockdown," said Sinalo Madolo, an administrator.

"That is the best situation going back to level five, because now people think everything is back to normal and they do not have their masks on."

No lockdown has been announced but last week president Cyril Ramaphosa announced a ban on alcohol sales and a curfew.

The government says young South Africans are the drivers of the new wave, as the largest number of new cases is in the 15-to-19 age group.

The spike has been blamed on a large number of young people attending parties, where they consume alcohol and do not wear masks or maintain a social distance. 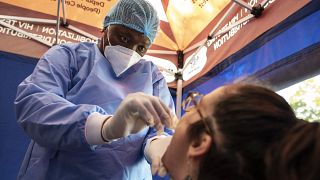