US President-elect Joe Biden announced it was "time to heal" a divided America in his first speech since winning the tense vote, as Donald Trump refused to concede and mounted legal battles against the outcome.

In the parking lot of his hometown of Wilmington, Delaware, he told a crowd of supporters to turn the page from what he described as a "grim era of demonisation" and urged Trump supporters to give him a chance.

“The people of this nation have spoken. They have delivered us a clear victory, a convincing victory," he said.

Biden’s win on Saturday in Pennsylvania put him over the threshold of 270 Electoral College votes he needed to clinch the presidency, which ended four days of nail-biting suspense as ballots were being counted.

He did not address Trump but did reach out to the 70 million who voted for him.

"For all those of you who voted for President Trump, I understand the disappointment tonight. I’ve lost a couple of times myself. But now, let’s give each other a chance. It’s time to put away the harsh rhetoric, lower the temperature, see each other again, listen to each other again" he said.

“This is the time to heal in America.”

Biden also thanked Black voters, saying the African American community had stood up for him in the vote.

It was his third time running for the presidency. The 77-year-old has spent half a century in public life as a US senator and vice president.

He was introduced by vice-president elect Kamala Harris, who has made history as not only the first female vice president in US history but also the first black and first Asian-American to do the job.

"While I may be the first woman in this office, I will not be the last. Because every little girl watching tonight sees that this is a country of possibilities," she told a crowd of supporters who honked and cheered from their cars.

Harris also paid tribute to her late mother who emigrated to the US from India at the age of 19.

First order of the day

As well as promising to unite the US, the Democrat also pledged to battle the coronavirus pandemic, rebuild the economy, root out systemic racism and secure healthcare.

He said even before he enters office he will name a COVID-19 taskforce on Monday "to help take the Biden-Harris Covid plan and convert it into an action blueprint that will start on January 20, 2021,” Biden said.

“That plan will be built on bedrock science. … I’ll spare no effort, none, or any commitment, to turn around this pandemic.”

The United States confirmed 126,742 new coronavirus infections on Saturday, a record number for a fourth day in a row. 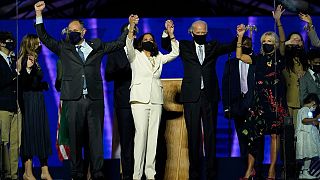 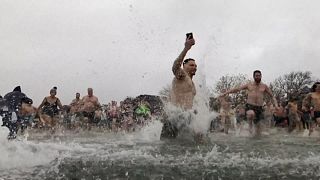