In Antananarivo, 300,000 households are expected to benefit from a welfare to ease the economic crisis caused by the coronavirus and the lockdown.

So far, 150,000 households have already benefited from either a cash donation, amounting to 15,000 CFA francs or received a food basket. But many poor people have reported not to have received any assistance. Others say that supports are insufficient.

The government is trying to reassure people who have not yet received the supports. The distribution would take time to avoid misappropriation and to respect sanitary measures.

"There are lists posted and the name of each recipient household must appear on them. If a person is not on the list, they can file a complaint and it will be dealt with. The President of the Republic says everyone should get help, especially the poorest."

So far, more than 40,000 Tananarivians have complained to the city council saying they didn't receive the supports. Thousands of people have also demonstrated in several districts of the capital for the same reason. In five months, half of the recipients had received aids in the capital, which amount to 150,000 households out of 300,000. 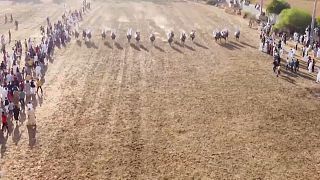