Almost all the fuel oil from the Japanese-owned ship that caused a huge oil spill, off the coast of Mauritius has been pumped out,

Mauritius Prime Minister Pravind Jugnauth says the operation had been a race against time. This came amid fears that the MV Wakashio would break up.

The ship, believed to have been carrying 4,000 tonnes of fuel oil, ran aground on a coral reef on July 25.

Thousands of Mauritians have been working for days to reduce the damage by making improvised booms from fabric and stuffed with straw and sugar cane leaves to try to contain the oil's spread. Others have scooped up oil from the shallow waters. 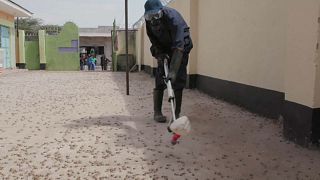