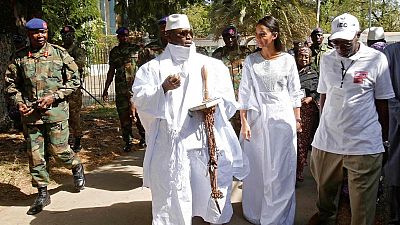 Former Gambian President Yahya Jammeh used bribery proceeds and stolen government funds to buy a mansion in a suburb of Washington, D.C., U.S. authorities allege in a lawsuit seeking to seize the property.

The west African nation’s longtime dictator conspired to launder roughly $3.5 million in “corruption proceeds” through the purchase of a lavish home in Potomac, Maryland, the Justice Department said in a civil forfeiture complaint.

Jammeh was 29 when he took power in a 1994 military coup. He ruled over Gambia for more than 22 years. He and his wife, Zineb Jammeh, fled into exile in Equatorial Guinea after he lost a December 2016 presidential election to Adama Barrow.

This action demonstrates that the United States will not allow criminals to profit from their crimes and will seek justice for crime victims both here and abroad.

Jammeh acquired at least 281 properties during his time in office and operated more than 100 private bank accounts directly or through companies or foundations in which he has shares or an interest, according to the Justice Department’s civil complaint.

“Neither Jammeh nor his wife Zineb appear to have family wealth to explain how he acquired these assets,” the complaint says.

The couple’s children attended schools in the Washington area after the family purchased the Potomac mansion in the name of a trust for $3.5 million in 2010, according to the complaint. A petroleum company employee allegedly arranged for roughly $1 million in cash to be deposited into an account for that trust less than one month before the property sale, the complaint says.

The unidentified employee opened a bank account in the trust’s name one day after the petroleum company received a “re-affirmance” of its fuel importation monopoly rights in Gambia, the complaint says.

“This action demonstrates that the United States will not allow criminals to profit from their crimes and will seek justice for crime victims both here and abroad,” U.S. Attorney Robert Hur said in a statement.

Jammeh hasn’t been charged with any crimes in the U.S., but the Justice Department complaint notes that a quasi-judicial commission established by the Gambian government recommended criminal charges against the former president.

The commission said Jammeh wasted or stole the equivalent of more than $300 million in U.S. dollars from public accounts. Jammeh also accepted bribes and kickbacks in exchange for granting monopoly rights to businesses over sectors of the Gambian economy, the complaint says.

A March 2019 report by an investigative group called the Organized Crime and Corruption Reporting Project said Jammeh and his associates plundered nearly $1 billion of timber resources and Gambia’s public funds.

The U.S. Treasury Department announced sanctions against Jammeh in 2017, saying he “has a long history of engaging in serious human rights abuses and corruption.”

“Jammeh created a terror and assassination squad called the Junglers that answered directly to him,” a Treasury Department news release says. “Jammeh used the Junglers to threaten, terrorize, interrogate, and kill individuals whom Jammeh assessed to be threats.”