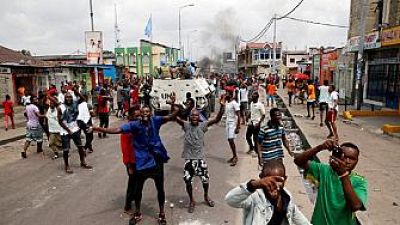 Thousands of protesters gather in the DR Congo capital Kinshasa, four days after five people were killed in banned demonstrations over the choice of a new election chief.

Protesters gathered in Boulevard Lumumba, one of the city’s main avenues, marching around a vehicle carrying former warlord and opposition chief Jean-Pierre Bemba.

The police broke up the gathering using tear gas, while men in civilian clothes threw stones at the demonstrators.
Some protesters were badly hurt falling from vehicles escorting Bemba.

Security forces using tear gas also dispersed other protests in the eastern city of Bukavu and in the central city of Kananga.

The marches were triggered by a decision by the National Assembly dominated by supporters of former president Joseph Kabila to appoint Ronsard Malonda as chairman of the independent national electoral commission, CENI.

Pro democracy campaigners say Malonda, currently CENI’s secretary-general, has played a historic role in rigging elections in favour of Kabila, who was succeeded in January last year by Felix Tshisekedi, son of a historic opposition leader.

Meanwhile, a police officer was sentenced by a military court on Monday to life imprisonment for the killing of a pro-democracy activist during a May demonstration in the eastern city of Beni.