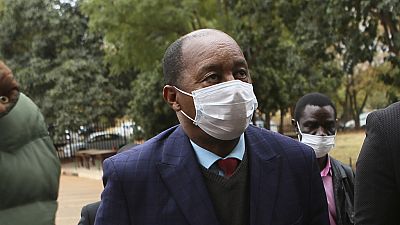 Given the latest development, it means the Health Minister remains at post as he answers charges of COVID-19 supplies related corruption in a Harare court.

Ministry of Health and Child Care stats valid as of June 20, 2020

Not even a single nurse is available.

It means all babies that go there today requiring emergency treatment will die.

This has been caused by LOOTING by Obadiah Moyo & ZANUPF.

Our original story published Sunday morning is below:

Obadiah Moyo, Zimbabwe’s embattled health minister has been fired by president Emmerson Mnangagwa, hours after he appeared before a court for charges relating to COVID-19 supplies related corruption.

Moyo was arrested on Friday by the country’s anti-corruption outfit, there are differing reports about whether he spent the night at his home or at a Harare police station. He appeared before a court and was hit with three corruption related charges.

The state prosecutor did not object to bail following which he was released on a $50,000 bail.

The scandal which been tagged COVIDgate has for weeks now roiled the country and played out on social media, where journalists and activists exposed how Moyo allegedly chose the company to sell medical supplies to the government at inflated prices that included face masks for $28 each.

The government cancelled the contracts following public uproar. One of President Emmerson Mnangagwa’s sons was forced to issue a statement denying a link to the company after pictures emerged of the Zimbabwean representative of the firm enjoying the company of the president and his wife and sons at several events.

The representative, Delish Nguwaya, and some top officials of the national drugs procurement agency are already facing criminal charges related to the scandal.

Nguwaya is accused of lying in saying the company was a drugs manufacturing company based in Switzerland, “whereas it was merely a consulting company with no experience in the manufacture of drug and medical products,” according to the charge sheet.